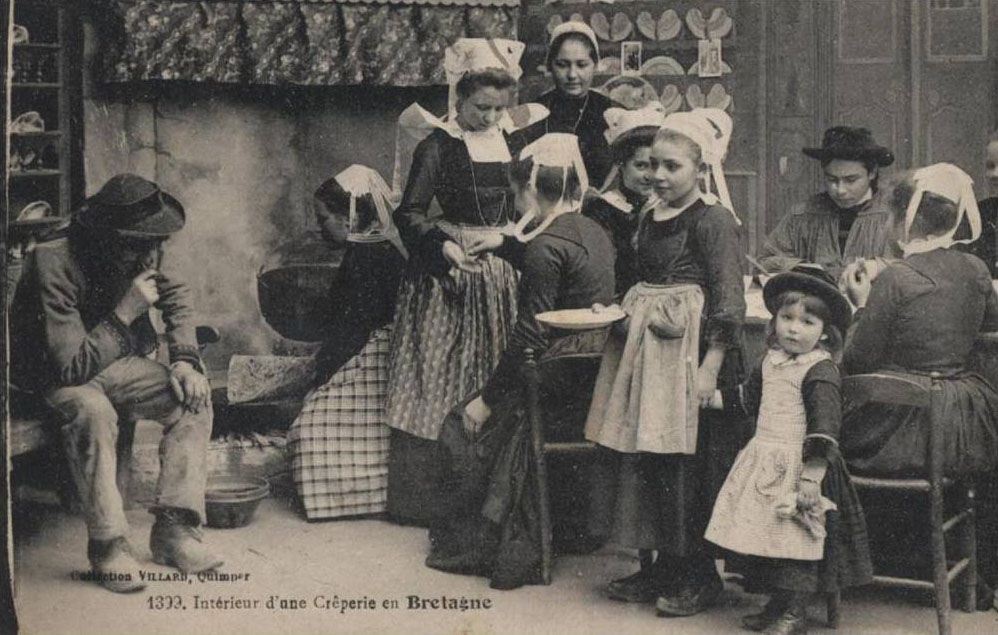 Creperie Saint-Marc in Quimper, the oldest in the city, has a life full of history… 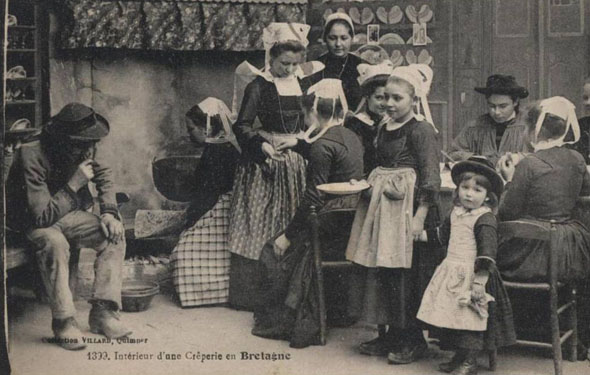 Inside a creperie in Brittany 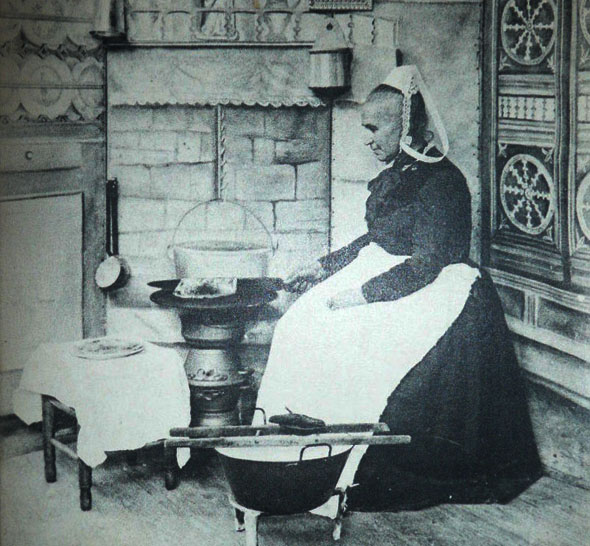 Cooking the pancakes on the billig in chimney

Since 1880 the lady owner of the stone house at 2 bis rue Saint-Marc welcomed bourgeois, trades and military to eat pancakes in her dining room.
The creation of the train station (1863), Gourmelen hospital (1878), the college of La Tour d’Auvergne (1886) had attracted more people to Quimper. The pubs thrived thanks to the weekly markets and the presence of the military.

The officers and enlisted men of the 118th Infantry Regiment based in Quimper, opposite street Saint-Marc, were used to come to the creperie with their pat of butter. The number of pancakes the crepe maker prepared was according to the size of the pat of butter they provided.

On Sundays, after the classical concert by the musicians of the 118th, the crepe maker regaled the military, or some noble music lovers came from all along the Quai, to listen to tunes of Franz Lachner, Verdi, Massé or Albert Parlow’s polka.

In her small kitchen, which has not changed much since that time, the crepe maker prepared paste and ingredients and cooked the pancakes in the chimney, on the billig. 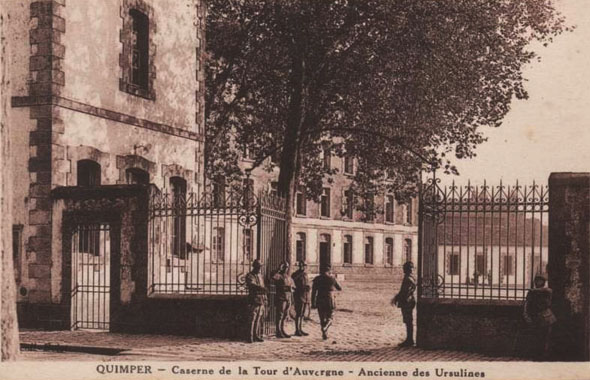 Entrance to the barracks of the Tour d’Auvergne in Quimper 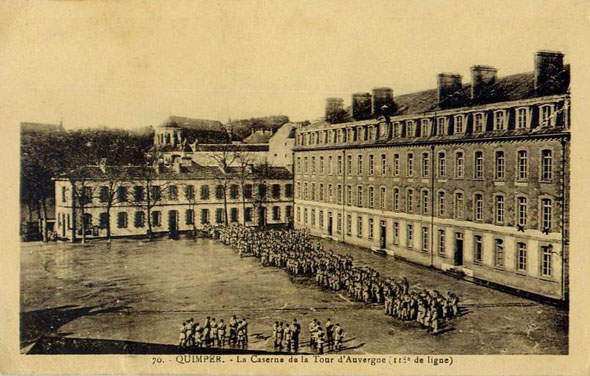 In 1874, the 118th Infantry Regiment settled in Quimper in the Ursuline Convent, which was the first institution of the Diocese, founded in 1621 by Sebastian Rosmadec for his sister Madeleine, who became the first Superior. 41 religious were expelled from their convent at the time of Terror and after the Concordat of 1801 the Ursulines had not recovered their buildings. In 1887 the barracks Ursuline took the name of barracks Tour d’Auvergne.

The 118th regiment of infantry was a prestigious regiment created in 1808 for the first campaign in Spain. The little son of Georges Clemenceau and General Petain will be assigned to it. From 1877 the garrison of 2,200 men based in Quimper. 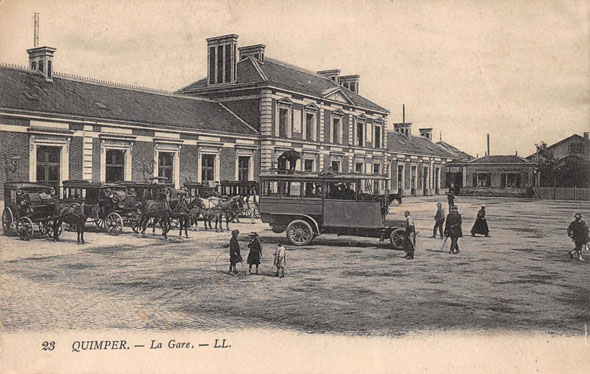 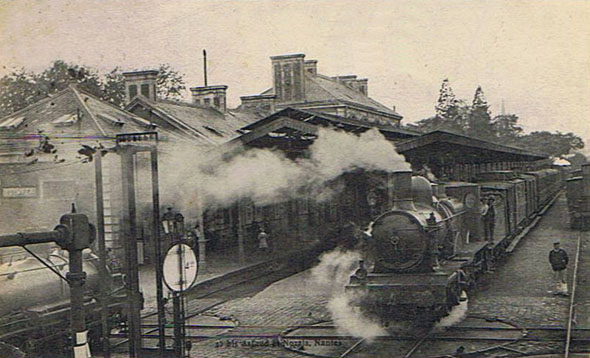 Departure of the steam train from Quimper’s station

The railway line and station

At the same time, the crepe maker was also receiving in his room, she had then furnished with benches and large farmhouse tables, engineer l’ingénieur Louis Auguste Marie Harel de la Noé.

After completing the construction of the lighthouse on the Île aux Moutons (Island of Sheep – Archipelago Glénans) engineer, its surveyors and supervisors were in the habit of stopping on the way to the railway yards to take their meals at the Creperie Saint-Marc (rue de Douarnenez was drilled in 1842).
Louis Auguste Marie Harel de la Noé was responsible for the construction of railways from Quimper to Douarnenez, Quimper to Pont L’Abbé and Rospoden to Concarneau.

At that time, the creperie also counted among its customers some local artisans including Jean-François Gourvès the rich blacksmith settled in the rue Saint-Marc, who had regularly drunk a bowl of cider. 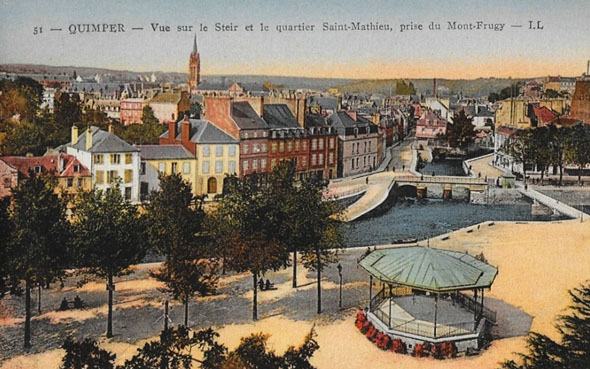 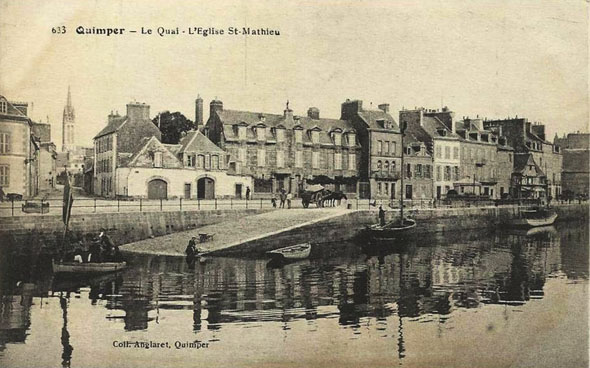 Quai and Saint-Mathieu Church in Quimper 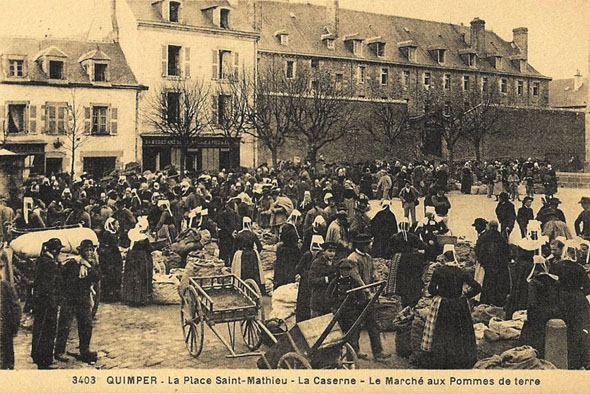 A little further down towards the Odet, Saint-Mathieu church dating from the fifteenth century had beautiful stained glass windows. In the north, all against the church was the chapel of Notre Dame du Paradis.

The parish cemetery spread southwards over much of the Place Saint-Mathieu. In 1788, this burial ground was deemed insufficient for the burial of the dead; his translation was needed elsewhere for reasons of safety and hygiene. On November 2, 1788, Day of the Dead, the new cemetery, near the Saint-Marc chapel, was solemnly blessed by the rector Coroller, accompanied by a numerous clergy and Attorney Lharidon de Penguilly, churchwarden of the parish.

The creperie, now located between the Church of Saint-Mathieu (St. Matthew) and Saint-Marc’s (St. Mark) cemetery was, from its creation, the institution where families gathered after the funeral and after Mass in cold weather.

Because of the weekly potatoes market of Place Saint-Mathieu, Creperie Saint-Marc is going to be, at that time, the meeting place of buyers and sellers from all over the region of Quimper. 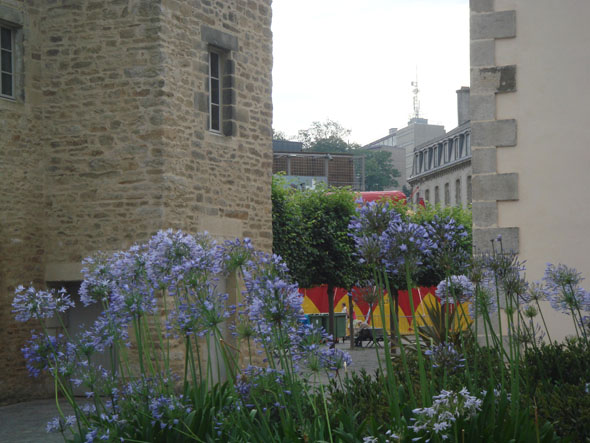 Today, the market is replaced by “The Big Market”, open-air market where no fewer than a hundred traders moved every Wednesday and Saturday in a green along the Steir and around Les Halles.

Located close to the creperie Saint-Marc, the Grand market offers year-round food and manufactured goods. It is a space where Quimpérois can shop in peace, where traffic is prohibited.

Creperie Saint-Marc, located in the Arts District of Chapeau Rouge (Red Hat) is also a meeting place for artists, visitors to the Media Ursuline, Theatre of Cornwall, the Convention Center and walkers from the Historical Center.

Gaëlle Prieur welcomes you throughout the year for tasty pancakes.